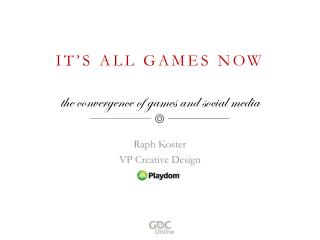 IT’S ALL GAMES NOW the convergence of games and social media. Raph Koster VP Creative Design. Once upon a time…. T here was a surreal kingdom inhabited by wondrous creatures . The magic circle. T hey lived inside a magic circle : a shimmering barrier put up by powerful magicians.