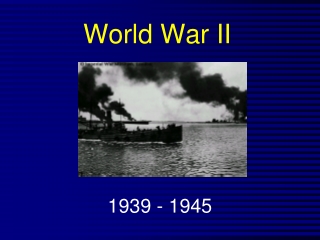 World War II. 1939 - 1945. The Rise of Fascism. Fascism is a nationalistic political philosophy which is anti-democratic, anti- communist, and anti-liberal. It puts the importance of the nation above the rights of the individual.

World War II - . goal 10. nazis ( nat-zees). nazi rise to power. what do you know about the treaty of versailles? young