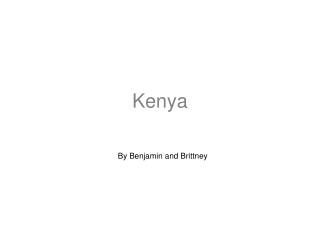 Kenya. By Benjamin and Brittney. Flag. Geography, Land, and Climate. Kenya bordered by Ethiopia to the north, Somalia to the east, Tanzania to the south, Uganda to the west and Sudan to the north west. The costal region is largely humid and wet The low Plateau is the driest part of Kenya Kenya - . kenya is a nice country. map. kenya is located in africa. nairobi. nairobi is capital of kenya.

KENYA - . there are two seasons in kenya: rainy season and dry season. rainy season happens twice per year. the equator

KENYA - . join us in a tour through kenya’s history from their independence to modern day. how did kenya become….

KENYA - . by : sam. kenya’s animals. the serval cat is one of the animals in kenya. it has the longest legs of any cat.

Kenya - . on safari. kenya. many people go on safari in kenya. there are lots of different national parks to visit. a

﻿ Kenya - . by kenya chestnut. map of kenya, africa. kenya is in eastern africa bordering the indian ocean between

KENYA - . the jewish community of. kenya , is a country in  east africa  that lies on the  equator tanzania is  to

Kenya - . originally there was little imperial interest in east africa per se

KENYA - . some history. early habitation: people from northern africa moved into the area around 2000 bc nilotic and