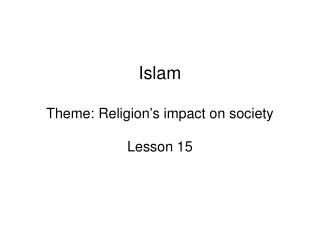 Religion and Society - . religion can play several roles in society: a unifying role: religion gives society a sense of

Difference Between Deen and Religion and its impacts on human life - . in the name of allah, the most gracious, the most

Muslim Unity - . muslim unity. muslims are supposed to work together towards a common goal set by the quran and shown by

Muslim Ethics - . studies of religion – depth study (islam). ethical dilemmas. should i donate a kidney so that another

The 5 Pillars of Islam - . class 6. the five pillars. muslims obey five pillars as an outward sign of their belief. the

Personality Development in Islam And Its Effects on Nations and Civilizations