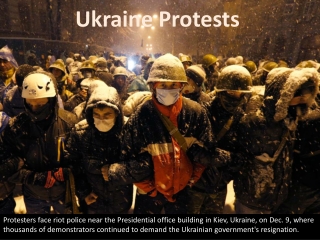 Protests continued today in Kiev after President Viktor Yanukovych decided not to sign a pact with the European Union. Yanukovych's meeting with opposition leaders today yielded no real progress on the issues that have brought massive demonstrations to the country for the last three weeks. 2.6 Protests - . don shannon. what is a protest?. discussed in far part 33.1 is “a written objection by an interested

Protests Begin - . students for a democratic society -teach-ins about the war -picketing the white house -backlash