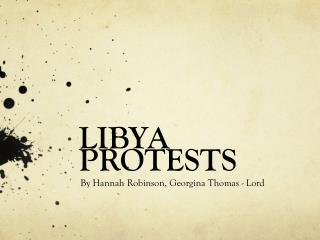 Libya - . location: libya is located in the middle of north africa, bordering the mediterranean

Libya - By rina lidder , period 6. libya. map. libya is a country located in north africa. it is a country that lies

Libya - . vs. located in northern africa, libya is bordered by egypt, sudan, chad, niger, algeria, and tunisia. libya is

Libya - . by; chantese riley. map of libya. libya is slighty smaller than alaska. u.s.a. flag of libya. red; was selected

Libya - . a slideshow presentation by juztin b, ramona k and jaymee b.

Libya - . by marley paavola why is libya developing? thesis this country is developing because they can’t produce

Libya - . deep history . ruled by the romans then ottoman then italians only became a unified political entity in the