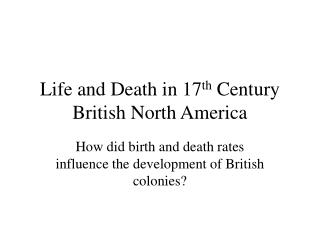 Life and Death in 17 th Century British North America. How did birth and death rates influence the development of British colonies?. I. Stable Societies: The New England Colonies. A. The “Numbers”. Nuclear families came in tact across the Atlantic

Chapter 4 American Life in the 17 th Century - . the unhealthy chesapeake. the settlements near the chesapeake (jamestown

17th Century Colonial Life I. To Be Chosen in the Chesapeake - . ch. 4. a.three out of every four english migrants in the

Essential Question : - How did the british american colonies change from the 17 th &amp; 18 th centuries? what

American Life in the Seventeenth Century - . chapter 4. the unhealthy chesapeake . life in america was brutal, especially

SSUSH1 The student will describe European settlement in North America during the 17 th Century. - The standard. ssush1

18 th Century Social and Economic Change - . the dawn of the agricultural and industrial revolutions. . economic and

DEATH AND DYING - Chapter 19. death and dying. learning objectives. dying and death across the lifespan. what is death?.