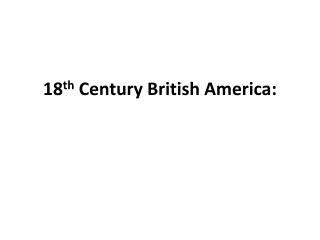 06. 18 th Century Colonial America - . purpose: to gain an understanding of how politics, society, and culture evolved in

Life in the 17th Century - . remember the organizing principal: between 1607 and 1763, the british north american

Colonial Life in the Seventeenth Century - . the unhealthy chesapeake. half the people born in early virginia and

Essential Question : - How did the british american colonies change from the 17 th &amp; 18 th centuries? what

Colonial Society in the 18 th Century - . creating the american spirit. life in the chesapeake. population. life

EXPERIENCE OF EMPIRE: EIGHTEENTH-CENTURY AMERICA - . america: past and present chapter 4. growth and diversity.

Eighteenth-Century America - . chapter 3. colonial society in 1700. not a homogeneous society ethnic and religious