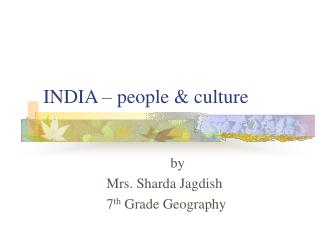 INDIA – people & culture by Mrs. Sharda Jagdish 7 th Grade Geography What you will learn today. The population of India Influences of the past Religions practiced Art and Architecture Languages spoken Festivals celebrated Compare the life of a teenager in India with yours