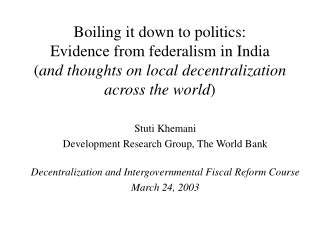 Boiling it down to politics: Evidence from federalism in India ( and thoughts on local decentralization across the world ). Stuti Khemani Development Research Group, The World Bank Decentralization and Intergovernmental Fiscal Reform Course March 24, 2003. Issues.