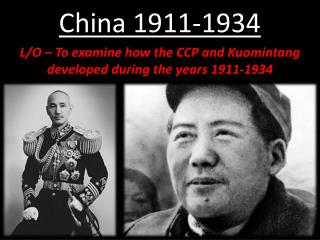 China 1911-1934. L/O – To examine how the CCP and Kuomintang developed during the years 1911-1934. The Decline of the Qing Dynasty. In medieval times China had been an advanced civilisation . In the 1800s, however, it was much weaker than the growing empires of western Europe. Depression Chant, 1934 - Take care of yourself first, then you will be able to take care of students. there is mean