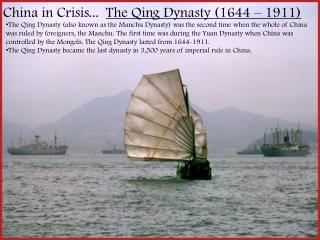 FORBIDDEN CITY Gates, walls and moat - The forbidden city the residence of the emperors for nearly five hundred years,

A Bit on the Yuan Dynasty, But More on the Ming and Qing Dynasties - . world civilizations. the yuan dynasty. mongol

Ming and Qing Dynasty’s 1369-1911 C.E. and the West - . successfully kicked out the mongol yuan dynasty re-established

China and the Rise of Communism - . democracy’s failed battleground. big trouble in little china. the fall of the qing

Asia and Islamic Empires in Transition - . time to pull out those maps. ming and qing empires. here is your reference

Why did Qing Dynasty end? - . many reasons… . they were foreigners- manchurians not han chinese-discrimination against

MING AND QING CHINA AND THEIR INTERACTIONS WITH EUROPE AND RUSSIA - . by nari choy, kaitlin dennison, dylan shwan, jenny