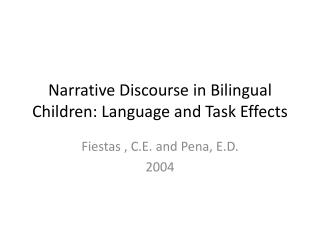 Task Telling a story - . skills building1: plotting a story. 1. ask the students to retell the story fog. 2. what kind of

Language Assessment of Bilingual Children - . information about bilinguals in u.s. bilinguals not “two monolinguals in

Introduction to second language acquisition and Specific Language Impairments in Children - . 37-975-01 challenges to

THE EFFECTS OF TASK COMPLEXITY ON MEASURES OF ACCURACY AND LEXICAL VARIETY IN EFL WRITING - . nihal gökgöz , marmara

Bilingual Children - . do they really have an advantage?. bilingual children. side one – 2/multiple languages as a

My name is Elizabeth Reyes Viands. I am from Veracruz, Mexico. I have a Bachelor degree in Education Administration.