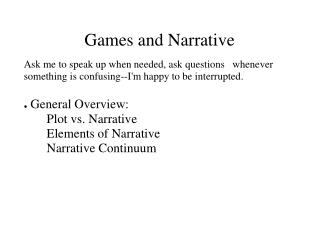 Games and Narrative - Ask me to speak up when needed, ask questions whenever something is confusing--i'm happy to be

Games, Play and Narrative - Games as media, and game studies as an academic discipline games as an object of academic

Games, Play and Narrative - . games as media, and game studies as an academic discipline. games as an object of academic

Narrative Structure in Games - . with your host, ~ellen jurik~. who am i?. worked with independent company, “sandbox

Importance of Narrative Within Games

Autobiography and Narrative - . using the self as a source for composition and writing. what is autobiography?. telling

Story and Narrative - . part 1! (up to granularity) brendan sim. why put stories in games?. stories can add significantly

Narrative and Definitions - . introduction. the introduction to many pieces of academic writing contains some kind of

Narrative - . periods 2-4. brainstorm a list of your personal “basic principles,” values, or rules to live by. list

NARRATIVE - . valentina widya.s. social function. is to entertain, to gain and hold the reader’s interest in a