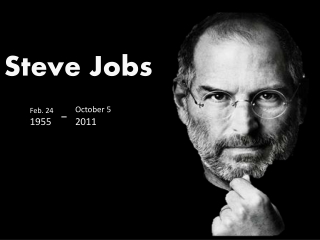 Steve Jobs. October 5 2011. Feb. 24 1955. Who’s Steve Jobs?. . Steve Jobs is the co-founder and CEO of Apple Inc. he had died at aged 56. Job’s was evolutionary and has changed the course of technology He has developed Apple software's we use to this very day.

Steve Jobs - . by jamie. at college. when he was at college he only was in there for a semester and then he got kicked