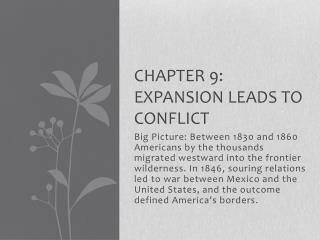 Chapter 9: Expansion Leads to Conflict. Big Picture: Between 1830 and 1860 Americans by the thousands migrated westward into the frontier wilderness. In 1846, souring relations led to war between Mexico and the United States, and the outcome defined America’s borders. Conflict Management - . conflict. “conflict is disagreement between two or more individuals or groups with each

Developing Your Conflict Competence - . after this session, you will be better able to…. appreciate the importance of