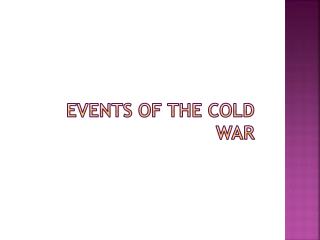 Events of the Cold War Events of the Cold War. China becomes Communist. 1945 – Civil war broke out in China Nationalists vs. Communists Communists won – led by Mao Zedong Communist reforms put in place Land taken from wealthy and given to poor Farms were collectivized (shared)

Events of the Cold War