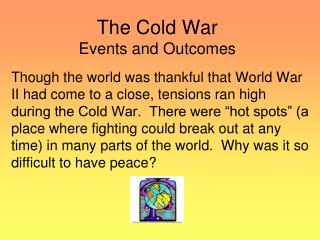 The Cold War Events and Outcomes

The Cold War Events and Outcomes. Though the world was thankful that World War II had come to a close, tensions ran high during the Cold War. There were “hot spots” (a place where fighting could break out at any time) in many parts of the world. Why was it so difficult to have peace?.

The Cold War Events and Outcomes

The Communist Wars- Cold War, Korean War &amp; Vietnam War - . the cold war- no, it was not a very “cold” war!

SS5H7: The student will discuss the origins and consequences of the Cold War. - The cold war in europe, the “iron

Cold War Events of the 1960's - . kennedy and the cold war. key events include: bay of pigs building of the berlin wall

Cold War - . eusner / gaffney/ryan vus 13a -b. what were the political, economic, and social consequences of world war