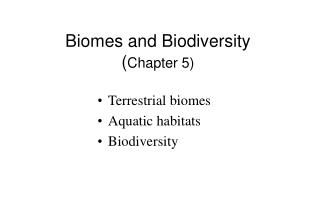 Chapter 6: Habitat degradation and loss - . biggest threat to biodiversity; over 80% of land on earth is affected by

World Biomes - . follow along with your note packet to add/modify any notes you took as you read the chapter. tropical