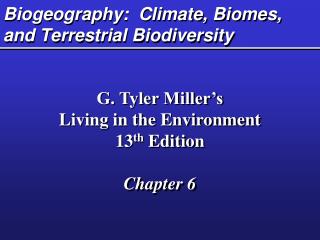 Biomes - . a look at biomes of the world. biogeography. biogeography – the study of where organisms live. alfred

Unit 4 Biomes&amp; Communities - . climate, biomes, and community interactions. what is the biggest influence on the

Biomes - . biome. a biome is one of earth’s large ecosystems, with its own kind of climate, soil, plants, and animals.