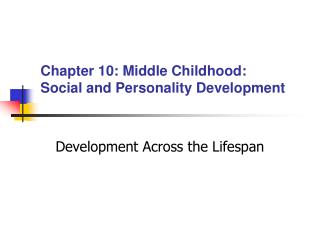 Chapter 14 Early Adulthood: Social and Personality Development - . development across the lifespan. the components of

Chapter 10: Socioemotional Development in Middle and Late Childhood - . mcgraw-hill. © 2006 by the mcgraw-hill

Development in Middle Childhood - . memory strategies. rehearsal-repeating information to oneself over and over again

Chapter 10: Personality - . an individual’s unique and relatively consistent pattern of thinking, feeling, and