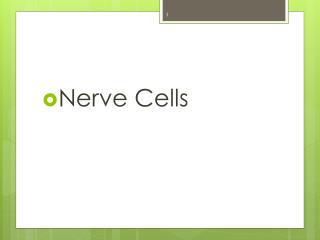 Chapter Two Nerve Cells and Nerve Impulses - . what, then, is the brain? the brain, perhaps the most complex system.

Chapter Two Nerve Cells and Nerve Impulses - . cells of the nervous system. neurons and glia the structures of an animal

SF180 Brain :Support the healthy nerve cells - Sf180 brain :-https://supplementgo.com/sf180-brain/ do you know what a

Types of Cells--Nerve, Muscle, Immune, and Skin - . nerve cells. the human body is made up of trillions of cells. cells