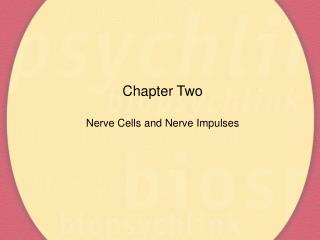 Chapter Two Nerve Cells and Nerve Impulses. WHAT, THEN, IS THE BRAIN? The brain, perhaps the most complex system. What is the functional organization of the nervous system? 1. Reticular doctrine : Is the brain a reticular structure, a syncithium? NO

Chapter 35-2 - . nervous system. structure of the neuron. neurons come in all shapes &amp; sizes have common

CONDUCTION OF NERVE IMPULSES - . *nerve impulse is a sum of mechanical(injury) ,chemical(heat,cold) and electrical

Neuron Description and Nerve Impulses - . neuron: cells of the nervous system specialized to transmit messages throughout

Chapter 2 Neuroscience - . a little exercise. see in class!. brain and mind. topics to explore. the neuron the peripheral

Chapter 2 Nerve Cells and Nerve Impulses - . membrane : separates the inside of the cell from the outside environment