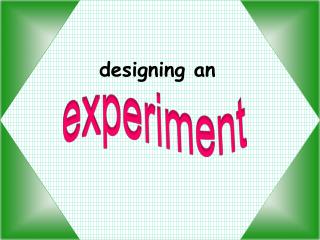 designing an. experiment. A variable is something that changes. THERE IS NO SUCH THING IN THE ENTIRE UNIVERSE AS A CONSTANT VARIABLE. No . Never . Not appropriate . Don’t ever . Don’t even think about it!. I mean it. 6 concepts of experimental design. independent variable.

experiment - Designing an. experiment. a variable is something that changes. 6 concepts of experimental design.

Franck-Hertz Experiment - . figure 2: simplified plot of electron kinetic energy as a function of position along the

Taste Test Experiment - . step 1. take a plate of food do not eat yet! take sheet 1 eat a small bite of each brownie and

Bubble Gum Experiment - . learning goals: students will be able to use the scientific method to solve problems and

Experiment - . an experiment deliberately imposes a treatment on a group of objects or subjects in the interest of

Lolly Snake Experiment - . by matt g, cam g and brayden d 8 jade 2012. hypothesis and aim. the aim of this experiment was