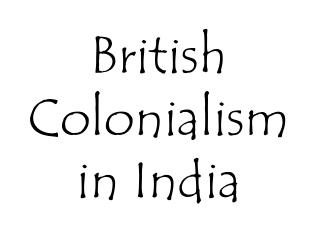 British Colonialism in India. What is Colonialism?. The policy of acquiring and maintaining colonies for exploitation. Why would countries do this?. Natural resources Places to sell their goods Land for an expanding population Be stronger, better, larger than their rivals. India’s Road to Freedom - . how and why they got their independence. the british take over. the start of what became

How did the British take control of India? - . l/o – to identify the reasons why the british took control of india.

British Conquest of India - . the british gained control of india in the 18 th and 19 th centuries before british control

B. British in India - . b . british in india 1. british east india company a. originally established trading rights in

THE BRITISH IN INDIA - . ruled largely by the british east india company they hired sepoys , indian soldiers, for

Chapter 39 - . the end of empire. decolonization in asia. india. the jewel of the crown legacy of british colonialism

Aim : How did British Imperialism affect India? - . do now : what can you infer about british imperialism in india from

A British officer in India, 1870s - . the young, pro-british maharaja of bharatpur, 1860: the princely states contained

British Imperialism in India - . what was the british raj and why did it form?. economic imperialism in india. 1600: