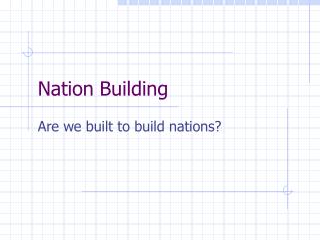 Nation Building. Are we built to build nations?. Nation Building a Dirty Word?. Stability Operations A partnership to establish or reestablish the institutions essential to democracy and good governance. Who’s in Charge?. United Nations Coalition or Regional Security Organization Nation Building - . setting up new territories. problems of congress . many soldiers were not paid united states has no

American Colonies: Nation Building - . between 1607 and 1763, americans gained control of their political and economic

Building a New Nation - . project overview. step 1. you and your partner will pick one of the 56 signers of the