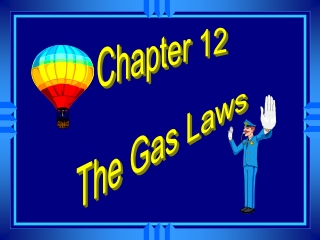 The Gas Laws. Describe HOW gases behave. Can be predicted by the theory. Amount of change can be calculated with mathematical equations. The effect of adding gas. When we blow up a balloon we are adding gas molecules. Doubling the the number of gas particles doubles the pressure. Kepler’s Laws - . why you can get there from here. goals. kepler: astrologer turned astronomer. kepler’s laws. proof

The Empirical Gas Laws - . boyle’s law : the volume of a sample of gas at a given temperature varies inversely with the

Define the term “Law.” Do you think laws are necessary? - . do now. big idea. laws are important in a democratic

Laws of Logic - . outline. what are some of the laws of logic? -law of non-contradiction -law of identity -law of

Kepler’s Laws - . why you can get there from here. goals. is astrology a science? why should we care? kepler :

The Laws of Motion - . newton’s three laws of motion: describe the relationship between all the external forces acting

The Origins of Law - . law 12 mr. laberee. why do we have laws?. what would a world with no laws be like? would anarchy

Balancing Chemical Equations - . matter is neither created or destroyed in a chemical change. laws. in most of life, laws

Where Does It Say That In the Laws? - . law interpretation. some truisms are not included in the laws. some laws are not

The Leo Laws - . teacher laws. teachers work closely with our students and there are many policies, guidelines and