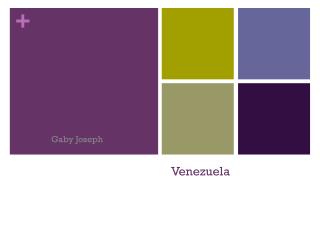 Venezuela. Gaby Joseph. Aquí Está. A Bit Of History. In the mid-1800’s Venezuela was engaged in the Federal War Federal Army fights to gain control of city Changes government to what it is n ow , a Federal Republic Independence Day: July 5 th 1881 In 1921, the Venezuelans encountered oil