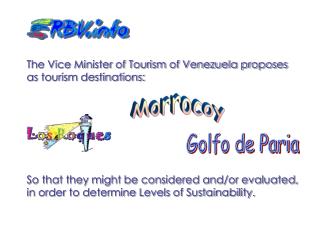 Venezuela. The Vice Minister of Tourism of Venezuela proposes as tourism destinations: So that they might be considered and/or evaluated, in order to determine Levels of Sustainability. Morrocoy. Golfo de Paria.