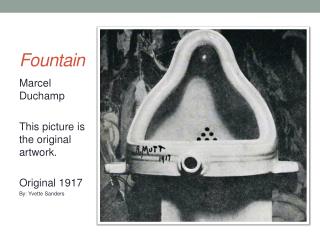 Fountain. Marcel Duchamp This picture is the original artwork. Original 1917 By : Yvette Sanders. Childhood . Lived 1877-1968 and only produced a few pieces of art. He actually just stopped making art and took up chess later in his life. Fountain Construction - Oases water care is one of the affordable, cheapest, efficient fountain construction company in

Fountain pens - Want to write stylish with great speed? then bestexecutive is available fountain pens for sale with

SDLC Forensic Fountain - . jamie fegler and matt kerbs. project plan. the system we are developing for our business is a