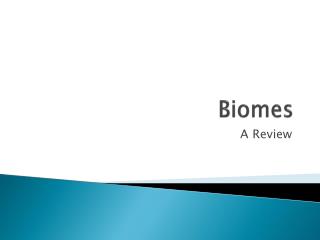 Biomes. A Review. What is a Biome?. Biomes are a geographical area of distinctive plant and animal groups adapted to the climate and geography of the region. There are over 30 Types of Biomes on Earth. Climate.

Biomes - . section #3: grassland, desert, and tundra biomes. biomes of the world. found in climates that have less

HOT DESERT BIOME - . option 7: geoecolgy. what is a biome. biomes are unique natural world regions which are controlled