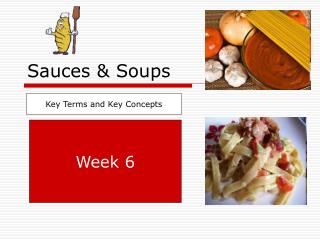 Sauces & Soups. Key Terms and Key Concepts. Week 6. Key Terms. 1. Au jus. French for " with [its own] juice "; jus is the juice itself. In American cuisine, the term is mostly used to refer to a light sauce for beef. 2. Bisque. Rich cream soup that uses shellfish as the base. There are several classifications for sauces - Definition. it is the fusion between a basic fund and a supplementary

Unit 16: Soups - . a good start to a good meal. what are soups?. they are a first course, an appetite stimulant, a

Sauces - . sauces are used to add flavour, moisture and nutritive value. sauces are liquids that are thickened . can be

Potrawy kraj w anglojezycznych - In english cuisine, appear a lot of sauces and the most important is mint sauce. british

Soup - . “soup is to dinner what a porch or gateway is to a building.” ~grimod de la reyni è re. quiz and review

SOUPS - Winter-main meal. ???. when might you eat a soup?. flavours of soup. soups. how can you buy soup?. garnishing