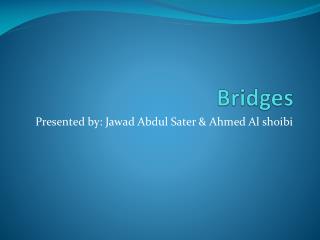 Bridges. Presented by: Jawad Abdul Sater & Ahmed Al shoibi . Forces. Before we take a look at bridges, we must first understand what are forces. What is a force? A force is a push or a pull How can we describe forces? Lets take a look at Newton’s law. Newton’s Laws.