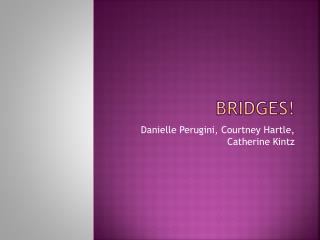 Bridges!. Danielle Perugini, Courtney Hartle, Catherine Kintz. facts. 1711: The first known bridge was built in England. Its name was the Perry Bridge. It is still standing today, and is the longest surviving bridge. Another name for it is the zig zag bridge, referring to it’s shape. Bridges and Their Design - . history. bridges have been used since the dawn of humankind stone bridges became popular in

Bridges - . by: stephanie w. courtney s. ethan k. five types of bridges. the beam bridge has a horizontal beam that is

Bridges over the Thames in London - . Автор: Дианова Наталья Михайловна

BRIDGES ON THE MOVE - . sean poynter, leed-ap senior abc estimator. a little about sarens…. bridges on the move…