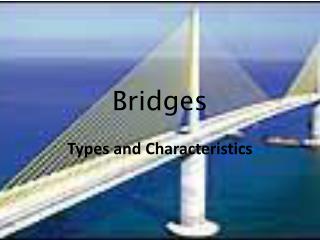 Bridges. Types and Characteristics. What do they do?. Bridges provide a way to get from one place to another that would have been hard to get to, due to an obstacle. Such as: a river, highway, valley, railroad tracks etc. Major Types of Bridges. Beam Arch Truss Suspension. Beam Bridge.