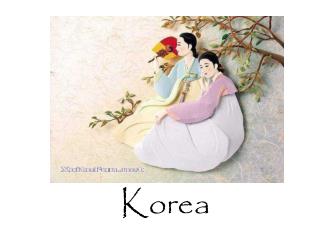 Korea - . the bridge between china &amp; japan. location. korea is located on a peninsula. a peninsula is a

KOREA - . the cold war beyond europe. the korean war. a grief stricken american infantryman whose buddy has been killed

Korea - . one nation, two countries. geography. “shrimp between three whales” how has its geography affected korea?.

Korea - . a brief history oc ogburn 1/c warren. ancient history. evidence of inhabitants dating back to 4000 bc in 668 ad

Korea - . a brief history. the

Korea - . by: pauline chang. image of south korea’s and north korea’s flag. i mage of tiger of how korea looks like.

Korea - At a glance. south korea is a developing country, having been one of the fastest growing economies in the world

Korea - . by amy. where i am from. i come from korea in wonju. wonju is a very good city. my favourite food is meat and