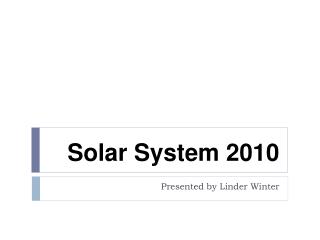 Solar System 2010. Presented by Linder Winter. EVENT DESCRIPTION. This event will address: The Sun Planets and their satellites Dwarf planets Comets Asteroids and the asteroid belt Meteoroids Oort Cloud Kuiper Belt. EVENT DESCRIPTION. A TEAM OF UP TO : 2

Our Solar System - . (an introductory tour). solar system formation. thanks to mary oshana. our favorite star. what are

Astronomy: The Solar System and Beyond 5th edition - . michael seeds. even a man who is pure in heart and says his