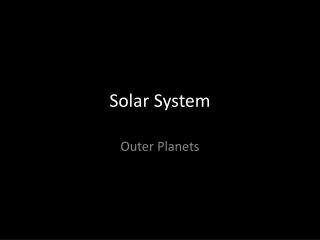 Solar System. Outer Planets. The Outer Planets. Our solar system’s outer planets are Jupiter , Saturn, Uranus, and Neptune . Pluto has been reclassified as a dwarf planet, one of many beyond Neptune. The Solar System - . by mrs. gazard’s class. venus was named after the roman goddess of love. slide by c.j. venus is

Solar System - . spheres and orbits. gravity causes planets to be roughly spherical to orbit in ellipses to hold onto