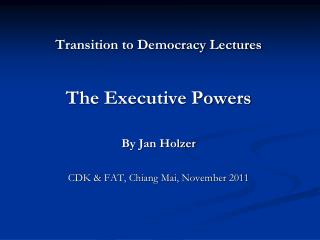 Transition to Democracy Lectures The Executive Powers By Jan Holzer CDK & FAT, Chiang Mai, November 2011. The executive power. The executive branch is one of the three main pillars of power in the state. United States v. Nixon - . a case study. separation of powers. the division of the powers of government among the

Transition JCR Training July 2008 - . table of contents. there are two ways to create a transition jcr . you can open a

Transition Seminar - . thanks to: max mayo for much of the information gathered and lewis center for church leadership.