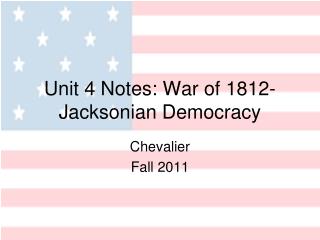 Jacksonian Democracy - “his adversity was his university”. jacksonian democracy. while the us was busy gathering land

Unit I Notes Basic Concepts of American Democracy - . what is government?. that complex of offices, personnel, and

The Jacksonian Era - . aim: what were the results of the jacksonian age? do now: what do we call the separation of

The War of 1812 Second War for independence? - . after reading madison’s war message – what did we identify as the