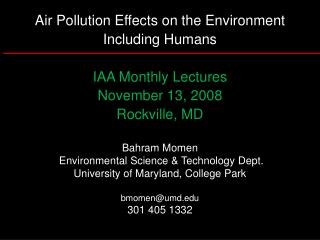 Point Source POLLUTION: CAUSES AND CONSEQUENCES - . collins. what is pollution?. pollution is the introduction of harmful

III. Freshwater pollution - . a. what is pollution?. the addition of any substance to water that has a negative effect

Air Pollution - . air pollution is the main cause of respitory diseases among children and along with fresh water are the

AIR POLLUTION Chapter 22 - . introduction. pure air does not exist! air impure to the degree we call polluted is an

AIR POLLUTION IS BAD! - . ways to save the air and our earth. by: ally, holt, huntley &amp; trace. what is air

Pollution And The Environment - . environment-all of the living and nonliving things around you. local environment people