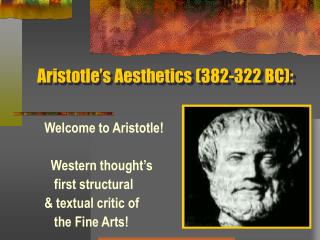 Ontology as a Branch of Philosophy - . a brief history of ontology. aristotle (384 bc – 322 bc) realist theory of

For philosophical reasons, … This forced Copernicus to retain … - T his radical shift … was a serious blow

ADULT ORTHODONTICS - . dr. fitri octavianti department of orthodontics usim. what will you learn?. indications and

Hi kids, I’m the famous Greek philosopher, Aristotle. You thought I died around - 300 b.c., but the church brought me

The Earth Moon System - . formation, development, and current state. we were wrong…. it was once believed that earth

Credibility - . credibility counts. &quot;ethos is the most potent of all means of persuasion&quot; (aristotle,