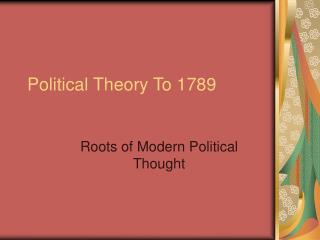 Political Theory To 1789. Roots of Modern Political Thought. I. The Ancient Politics of Virtue: Plato vs. Aristotle. Plato’s Republic (360 BCE) Question = What is justice? Answer = two types of justice

Analysing Political Cartoons - . who created the cartoon and who published it? when and where was it published and what

Political Parties - . chapter 8 . introduction. party competition is the battle between democrats and republicans for

Political Thinkers - Objective: explain how the ideas from the enlightenment impacted social, political, and economic

Political Participation - . to vote or not to vote (among many other types of participation) this presentation is the

CHAPTER 7 - . political philosophy. section a. anarchism. 1. governments contrary to the way of nature: chuang-tzu 2. an