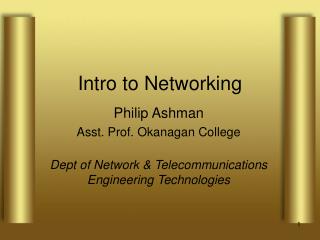 Intro to Networking. Philip Ashman Asst. Prof. Okanagan College Dept of Network & Telecommunications Engineering Technologies. Objective. A quick note of reference. The information contained in this presentation is all information that has been and can be readily found on the Internet. INTRO -1 Introduction to Cisco Networking Technologies Assembled By David Roberts - . knowing what you don’t know is

Introduction to Psychology Lecture 1- intro to intro - . one semester voyage in psychology terrain: me dida atkinson

Lecture 1: Intro to Plants, Intro to Science - . why do we love plants? what makes them so special?. plants are:. people

Lecture 1: Intro to Plants, Intro to Science - . why do we love plants? what makes them so special?. plants are:

Intro to Psychopathology - . dr. kayj nash okine. fact or myth ?. how much do you know about the field of