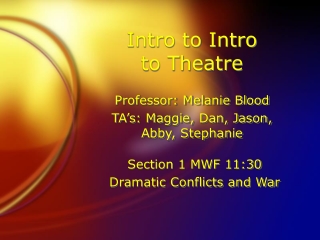 Intro to Theatre - . directing. why the director?. because the product of the director's art is not directly visible,

Intro to Shakespeare and The Elizabethan Theatre - . ms. melvin. william

Introduction to Psychology Lecture 1- intro to intro - . one semester voyage in psychology terrain: me dida atkinson

Lecture 1: Intro to Plants, Intro to Science - . why do we love plants? what makes them so special?. plants are:. people