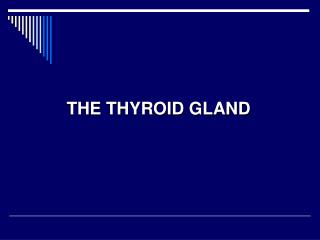 THE THYROID GLAND. Anatomy, Histology, Physiology. Situated in the anterior neck Macroscopic : two lobes connected through the isthmus Microscopic :- follicles which contain the colloid and are surrounded by a single layer of thyroid epithelium

D- The Thyroid Gland and Thyroid Hormones - . anatomy of the thyroid gland. follicles: the functional units of the

The Thyroid Gland - . jessica soley. ask dr. oz!. what does it look like?. where is it located?. the thyroid gland is

THYROID GLAND - . must know. how to examine the neck and diagnose thyroid enlargement from other neck lumps. clinical

Thyroid gland - . thyroid gland. largest gland in the body location : in the neck inferior the larynx and spanning over

Thyroid Gland - . by: bailey daniels and james gainer 7 th 1-12-14. location. located below the larynx two lobes on each

Thyroid gland - . embryology:* the thyroglossal duct develops from the median bud of the pharynx.* the foramen caecum at