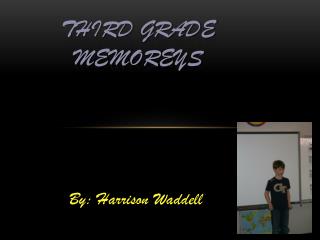 THIRD GRADE - . science week one. scientist’s use attributes to classify objects. what is an attribute?. an attribute

THIRD Grade - Social studies week one. third grade. south carolina is in what geographic region of the united states?.

THIRD GRADE - . social studies week two. what were the two main motivations for the exploration of south carolina by

Third Grade Memories - . by chase flagel. chase. i love baseball, basketball, and football i like school i am the baby of

Third Grade Orientation - . a year of learning, growing and having fun! mrs. cooper mrs. o’shell. what is a third

Third Grade Memories - By: ashlyn m. goila. third grade memories. things about myself. my mom’s name is lorelei. my

Third Grade Rules - . there are seven rules for third graders to know and follow. these rules are to keep you safe and