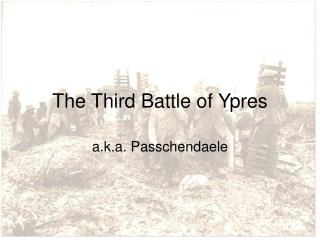 The Third Battle of Ypres The Third Battle of Ypres. a.k.a. Passchendaele. Aims of the Battle. Generals dreamed of breakthrough – would allow capture of German U-Boat ports on the North Sea Consistent with Allied and German view of the front as “one long battle”

The Third Battle of Ypres

Battle of Passchendaele The Third Battle of Ypres - . by: matti chrisman. facts and statistics. the battle was launched

The WWI Experience - . canada in the trenches. canada’s response. boys as young as 14 lied about their age and signed