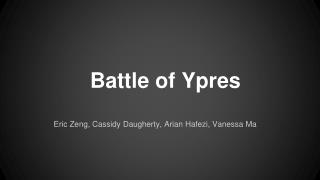 Battle of Ypres. Eric Zeng, Cassidy Daugherty, Arian Hafezi, Vanessa Ma . Thesis. Despite the introduction of widespread chemical warfare during the Battle of Ypres, strong defense against the German Empire resulted in the protection of the city and victory for the Allies. Background .

Battle for Iowa - Scenes from the countdown to the iowa

Battle of the Christmas lights - In many neighborhoods of los angeles, homeowners compete for the most lavish and

I give up! - Which battle marked the . end of the war. i give up!. &amp; was a. colonial victory over the forces of

THE BATTLE OF THE ATLANTIC - . september, 1939 – may, 1945. basic facts. the longest continuous military campaign of

Battle between Sitting Bull and Custer? - . little bighorn. describe assimilation. in this plan, native americans would

Telecom Warfare The battle for Survival - . the sequence of events……. the ‘per-second-billing’ revolution by tata

The Battle of Coleto Creek and Massacre at Goliad - . chapter 10 section 3. the goliad campaign: summary. troops from the

MOTIVATOR - . welcome to the. introduction : this message is intended to sensitize every true child of god about the need