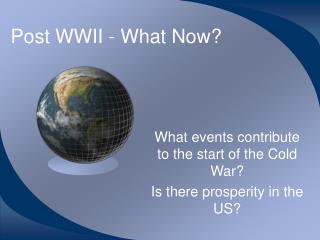 Post WWII - What Now?. What events contribute to the start of the Cold War? Is there prosperity in the US?. Important notes regarding end of WWII…. Yalta Conference (Feb ‘45) pic map Potsdam Conference (Jul ‘45) pic map United Nations Meetings (‘44 and ‘46) pic The Cold War! - . social studies 10 ms. rebecca. the end of wwii……. how do you think people felt after wwii? which